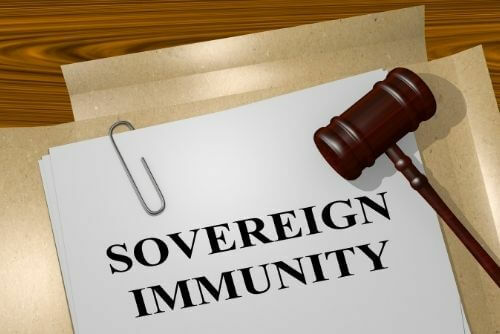 While there are exceptions to their immunity and states can waive their immunity, the 11th Amendment remains a powerful shield for the states. By asserting sovereign immunity, states can avoid most federal litigation in circumstance where there has not be an exception or waiver. The application of sovereign immunity in the area of intellectual property has produced some curious results.

The Supreme Court directly addressed sovereign immunity and intellectual property in Allen v. Cooper, 140 S.Ct. 994 (2020) revolving around IP resulting from salvage effort on a famous sunken ship. The Queen Anne’s Revenge, Blackbeard’s flagship, sunk off the coast of North Carolina in the early 1700s. Under state law, the ship and its artifacts became the property of North Carolina. In 2013, North Carolina entered into a salvage agreement that acknowledged North Carolina’s control over the wreckage and permitted the hiring of Allen, who would document the salvage operations. Because Allen retained control over the commercial media, he registered 13 copyrights.

The Fourth Circuit reversed and held the CRCA was an unconstitutional abrogation of North Carolina’s sovereign immunity. A unanimous Supreme Court, relying heavily on Seminole Indian Tribe as precedent, agreed that the CRCA unconstitutional and was an unlawful abrogation of North Carolina’s sovereign immunity. The Court recognized the inherent unfairness of state sponsored impingement to individual artists, but Congress’s purported justification for the CRCA was not convincing and it was still unconstitutional.

Allen is not the first time that IP rights faced a challenge based on the state’s sovereign immunity and it is not likely to be the last time. Based off the reasoning in Allen, it is reasonable to expect courts will continue to recognize immunity for states and state when IP infringement is alleged. The future for IP is further clouded by the issues of what is a state entity that is entitled to the immunity and when is the immunity inapplicable.  As states continue to grow their activities well beyond the traditional roles of governance, will there come appoint where the state is just a common commercial entity.

Due to growth of state involvement, the traditional state of 1798 no longer exists and states now have non-traditional operations that are well beyond the traditional roles of governance. Under current practices conditions these non-traditional entities may qualify as an arm of the state and be entitled to immunity. This qualification often depends on the state, any statue authorizing the entity, how the entity is financed, and the state’s control over the entity. For example, state universities frequently conduct research that generates IP that is ultimately assigned or licensed to a commercial entity.  When is that IP divested of the state’s sovereign immunity and what is the impact on the control of the IP?

The 11th Amendment protection for states with regard to patents has recently seen some erosion due to distinction between judicial proceeding and administrative agency proceedings. The issue came to light when sovereign immunity was raised before the Patent Trial and Appeal Board (“PTAB”) in connection with an Inter Partes Review (“IPR”) challenging an issued patent. An IPR is an administrative proceeding conducted before administrative judges that are appointed by the USPTO to the PTAB. Since states have some form of sovereign immunity protection regarding patents, it was expected that the PTAB would likely dismiss the IPR on the basis of sovereign immunity. However, two recent Federal Circuit decisions, Saint Regis Mohawk Tribe v. Mylan Pharms., Inc., 896 F.3d 1322 (Fed. Cir. 2018) and case Regents of the Univ. of Minn. v. LSI Corp., 926 F.3d 1327, 1330 (Fed. Cir. 2019), altered that expectation.

Until recently, states appeared to have some form of sovereign immunity protection regarding patents, as the Patent Trial and Appeal Board (“PTAB”) was likely to dismiss an inter partes review (“IPR”) on the basis of Eleventh Amendment sovereign immunity. However, in the recent case Regents of the Univ. of Minn. v. LSI Corp., the Federal Circuit held that sovereign immunity did not apply to IPRs. 926 F.3d 1327, 1330 (Fed. Cir. 2019).

In the first case, Saint Regis, Mylan instituted an IPR of several patents owned by Allergan. While the IPR was pending, Allergan assigned the patents to the Saint Regis Mohawk Tribe (“Tribe”). The Tribe immediately asserted tribal sovereign immunity, and moved to withdraw from the IPR. The PTAB refused this request and an appeal to the Federal Circuit followed. The Federal Circuit affirmed the PTAB’s ruling and that IPRs do not constitute adjudicator proceedings, but rather mimic agency enforcement. The Federal Circuit reasoned that the USPTO was a branch of the Commerce Department and it authority can from the federal government, which prevents the usage of tribal sovereign immunity as a defense. Saint Regis, 896 F.3d at 1327-1328. The Tribe’s petition for a writ of certiorari was denied.

In Regents, UNM alleged patent infringement by LSI, and LSI responded by filing an IPR. UNM argued it was an arm of the state and the PTAB should dismiss the IPR under state sovereign immunity. The PTAB recognized UNM as a state entity entitled to sovereign immunity, but held that UNM waived its immunity when it sued LSI. UNM appealed this PTAB decision to the Federal Circuit.

The Federal Circuit, following the logic from Saint Regis, held that IPRs were a form of agency enforcement overseen by the federal government and the defense of sovereign immunity, regardless of whether asserted by a tribal or state, was barred.

An interesting twist on the availability of sovereign immunity and its application in litigation involving state university licensed patents was presented in Gensetix, Inc. v. Bd. Of Regents, 2020 U.S. App. LEXIS 23262 (Fed. Cir. 2020). Gensetix was the exclusive licensee of several patents from the University of Texas (“UT”). Gensetix sued Baylor College of Medicine for infringement of the licensed patents. Gensetix asked UT to join in the complaint, but UT declined, and Gensetix named UT as an involuntary plaintiff under Federal Rule of Civil Procedure Rule 19(a). UT filed a motion to dismiss based on its relationship to Texas which it a state entity entitled to sovereign immunity. UT noted that it had not consented to join in the case and had not waived sovereign immunity in the licensing agreement with Gensetix. Baylor argued that UT was entitled to sovereign immunity and the 19(b) factors weighed in favor of dismissing the entire lawsuit instead of proceeding without UT.

The U.S. District Court for the Southern District of Texas agreed with UT and Baylor, 11th Amendment sovereign immunity prohibited the involuntary joinder of UT, a de facto state entity. The Texas court also agreed that UT was “necessary and indispensable” under Rule 19(a) and 19(b) and dismissed the suit. Gensetix at 5.

The Federal Circuit stressed that “proper analysis of the Rule 19(b) factors is…nuanced” and felt lower court placed too much emphasis on UT’s sovereign immunity status. Gensetix at 22. While the district court worried that UT’s absence would lead to future lawsuits, the Federal Circuit noted that UT’s license explicitly forbade a future lawsuit against Baylor in view of Gensetix’s current suit.

The different treatment of the sovereign immunity defense may be seen as a division between judicial proceeding in Article 3 courts and administrative proceeding in a federal agency. While many state universities are properly casted as state entities entitled to immunity, Gensetix, Inc. v. Bd. Of Regents raises the issue of immunity versus the Federal Rules of Civil Procedure (“FRCP”).  If immunity can abrogate involuntary joined under Rule 19(a) and 19(b), can an entity entitled sovereign immunity avoid other compliance obligations under the FRCP?

While Allen v. Cooper provides that states and state entities have a large protective sovereign immunity blanket in judicial proceeding, Regents of the Univ. of Minn. v. LSI Corp., clearly demonstrates that the blanket does not cover administrative agency. Gensetix, Inc. v. Bd. Of Regents crafted a remedy based on unusual circumstances that may not be applicable in the future.  One lesson from Gensetix for IP licensee’s is to insist that any licensor that may possibly be entitled to immunity agree contractually in the license to join in any suit asserting or defending the licensed IP.