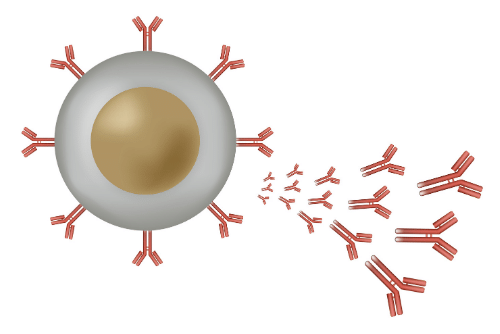 Sophisticated parties will be held to the agreements they negotiate, and the implied covenant of good faith will not negate an unrestricted contractual right.

Background
Lupus, or systemic lupus erythematosus, is an autoimmune disease in which a person’s own immune system turns on it and destroys healthy tissue. Patients suffering from Lupus have “intense B-cell activation.” That is, their immune systems are overcharged, and one type of immune cell, the B-cell, is out-of-control. The result is an auto-immune disease that causes self harm.

Biogen Idec MA Inc. (Biogen) developed treatments for Lupus, as did Glaxo Group Limited and Human Genome Sciences (collectively, GSK). In short, both developed antibodies that (1) bound a fragment of neutrokine-alpha and (2) by that binding inhibited the out-of-control B-cells. These antibodies are “biologics,” or pharmaceutical agents that are large, complex, biomolecules. The commercial embodiment of this biologic is “Benlysta,” and, according to pharmalive.com, GSK’s Benlysta 2014 US sales of Benlysta amounted to $256 million. This case arose from activities shortly after, in 2015.

Biogen’s patent over this technology had already issued, but GSK’s application claimed substantially the same invention. At the time (2007), US patent law directed the United States Patent and Trademark Office (USPTO) to issue patents to the “first to invent,” and the competition of who invented first was solved by an “interference” proceeding, which was a long, complex, and uncertain procedure. The USPTO would award the patent to the party found to have invented first, even if it had not filed its patent application first.

Biogen and GSK avoided the delay and uncertainty of an interference proceeding by settling their differences with an Agreement — Biogen would cancel its patent, and allow GSK to obtain the patent rights. In return, GSK agreed to pay Biogen $3.5 million in an up-front payment, two milestone payments of $1.5 million each, and royalties on Benlysta sales to last through to “expiration of the last ‘Valid Claim’ of any patent covering Benlysta.” On December 6, 2011, the USPTO issued US patent No. 8,071,092 (the ’092 patent) to GSK. Later, Biogen assigned its rights under the Agreement DRIT.

In the Agreement, Biogen and GSK agreed that a “Valid Claim” has “not been ... disclaimed”: “[A] claim of an issued, unexpired patent within the Patent Rights that has not expired, lapsed, or been cancelled or abandoned, and that has not been dedicated to the public, disclaimed, or held unenforceable, invalid, or cancelled by a court or administrative agency of competent jurisdiction in an order or decision from which no appeal can be taken or was timely taken, including through opposition, re-examination, reissue or disclaimer.”

In 2015, GSK filed a statutory disclaimer over the ’092 patent, which ended all rights over all patent claims in the ’092 patent. GSK then informed DRIT that its statutory disclaimer eliminated any Valid Claim, and ended all royalties under the Agreement. DRIT sued GSK and asserted claims for breach of contract and breach of the implied covenant of good faith and fair dealing.

Breach of Contract
DRIT argued, in the Superior Court, that the definition of “Valid Claim” did not contemplate elimination of a Valid Claim by a voluntary disclaimer because the word “disclaimer” was modified by the phrase “by a court or administrative agency.” The Superior Court disagreed and the Delaware Supreme Court affirmed. The Agreement allowed voluntary disclaimer, and GSK did not breach it.

The Delaware Supreme Court stated “Under Delaware law, sophisticated parties are bound by terms of their agreement.” However, no agreement can contemplate all contingencies, and there may arise gaps where no express terms apply to a circumstance. The implied covenant of good faith and fair dealing operates only where there are gaps – where there are spaces between the words. It requires the parties to deal honestly and fairly to address the gaps, and the court’s goal is to preserve the economic expectation of the parties. In contrast, the covenant cannot be invoked “when the contract addresses the conduct at issue.”

Since the Agreement contemplated voluntary disclaimer, there was no gap. The Superior Court should not have invoked the implied covenant of good faith and fair dealing. That GSK might voluntarily use disclaimer to extinguish its royalty obligation was “not an event outside of the contemplation of the parties.” There was no “good faith” or “discretion” needed to fill the space between the words. The assignee, DRIT, was stuck with the Agreement it bought from Biogen, which gave GSK the unqualified right to disclaim the ’092 patent and end its royalty obligation. The Superior Court’s judgement was reversed. Self harm released GSK.